Skritswap is pleased to announce that Chris Pagnutti has joined the team as of January 2018. Chris brings a strong full stack development background and we are delighted to have him join us: 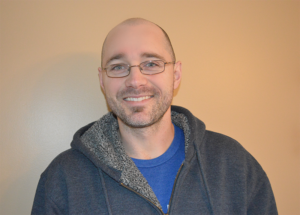 Chris is a full-stack software developer and devops engineer.  He has built applications end-to-end for many multi-national brands including, Verizon Wireless, IBM, John Frieda, Lisnr, the B.C. Ministry of Health, and the one-and-only Shakira, to name a few.  He has the full set of tools required to see a software project from its initial data design to the implementation of the business logic, through to a deployment architecture capable of onboarding millions of users in a short time.

Chris’ educational background is in theoretical physics, and during his time in academia he and has written computational models in fields as diverse as supernova and black hole physics, computational ecology, and global food trade and land use dynamics.

After earning a Ph.D in mathematics and a postdoctoral fellowship fulfilled at the Perimeter Institute in Waterloo, ON, he became involved with the world of applications development. He has never looked back.

We asked him some key questions to get to know him more and about what makes him so excited to join the skritswap team:

1) Tell us a little bit more about you as a person and what you enjoy.

Aside from maybe being a super-geek, I think I’m a pretty ordinary guy.  I enjoy spending time with my wife and kids, and I look forward to weekly get-togethers with my extended family.  I’m interested in anything high-tech, but in spite of that one of my favourite things to do for fun is to go camping in a tent in the middle of nowhere, cooking on fire.

2) What are you most excited to work on at skritswap?

As a first step, I’m mostly focused on doing a nice clean job on the web services part of the project.  I’m excited to build out an application, architecture, and deployment workflow from the ground up using all the cool new technologies. But I’m really looking forward to seeing how the AI starts to take shape once we have a workable model.

3) Why did you want to join the skritswap team?

I think that most developers would agree that the best time to become involved with a software project is the very beginning.  There’s something really refreshing about being there to write down the very first lines of code.

4) What is a cause in the world that you are really passionate about?

Many people might agree that industrialization, globalization, and the spectacular technological revolution we are all witnessing have changed the world permanently in many ways, many of which paint a dire picture of the future.  For example, global warming, food crises and nuclear threats are all hot topics nowadays.  Although it may seem counter-intuitive, because technology seems to have caused many of these problems, I believe that improving technology is the only realistic way back to a wholesome state.  In particular, I think that automation and AI will play a crucial role in any successful solution to many of the world’s problems.

5) Where do you want to see skritswap in 3 years?

I would love to see skritswap all over the web in 3 years, perhaps as a familiar widget that appears on every website’s Terms of Service and Privacy Policy.  Maybe then people will actually start reading those things.